CINCINNATI–In the last 7 years, renewable diesel production has developed rapidly and many of these plants and new proposed projects will produce renewable diesel at a much larger scale than even the largest biodiesel plant.

At important business conferences, like the recent American Fats and Oils Association annual meeting in Chicago in mid-October 2019, discussion inevitably turns to the expected surge of renewable diesel and co-processing capacity and about the feedstock supply and demand balance.

“Ten years ago would anybody have ever guessed that we would have produced five times the biodiesel we did back in 2009-2010? I would have said no,” said Nate Burk, a consultant with INTL FCStone Financial during his presentation delving into the feedstock dynamics for the next 10 years. “In 2010, if you will recall we had a lot of talk of food vs fuel and in the last few years we have multiplied the biodiesel production by five fold, yet the food vs fuel has disappeared. So, we have grown the industry a ton in the last few years and proven that we can put the feedstock behind it.”

Burk expects that in three years, the market will see renewable diesel capacity or production increase by 1bn gallons.

“You are looking at taking what used to be a 2bn gallon cap and raising it to past 3bn just in the coming three years,” he said. “Keep in mind that the number for 2021, although that seems like a crazy growth number, most of that has already been publicly announced and there are a handful of plants that have not been announced yet as well. So, the capacity is going to be there.”

With billions of gallons of renewable diesel production expected to come online in the next few years, the persistent question of where will all the additional feedstock come from remains an ongoing concern. 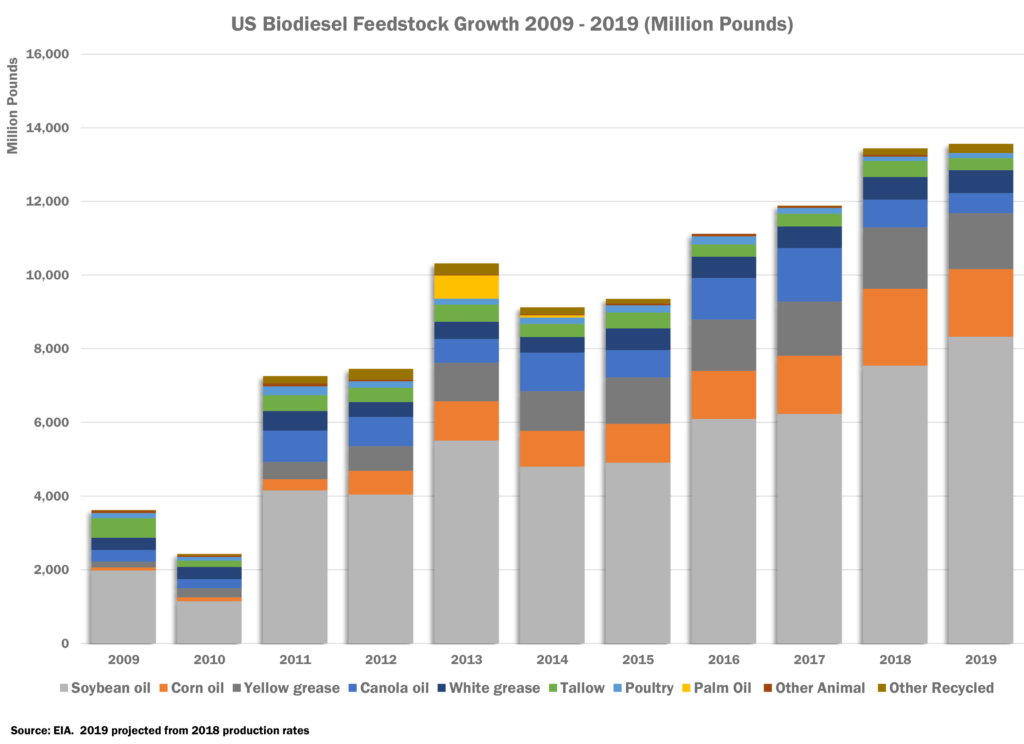 “So, we have already increased production by roughly 5bn lbs and we are projecting that production will continue on that same path,” Burk said.

As for Canola, from the US crush, FCStone expects 4% crush growth annually, food consumption growth to be about 3% annually and imports to grow by 8% annually.

“We will see imports grow pretty dramatically within the coming 10 years,” Burk said. “With all this outlined we show that there is another 530m gallons of production that could come from the canola oil. So, now you are at roughly 1.17bn gallons in the coming 10 years that can come from just the soy and canola.”

When analyzing the fats and grease markets, FCStone made conservative projections. They expect tallow and poultry to grow by just 1.5% annually, in line with historical growth. White grease and used cooking oil (UCO) production is projected to grow at 3% annually.

“Even though those numbers seem pretty crazy, look at what we have done between 2017 and 2018,” said Burk. “You have tallow imports increased by 40% in one year and the UCO imports increase 63%. So, to see another 25% increase annually I don’t think that is too far off.”

The tallow imports are expected to come from predominantly Australia, while the UCO is probably going to come from various third world countries that now don’t have that great of an aggregation or collection system.

Burk says the increase in demand will come from the biofuels programs, like the California Low Carbon Fuel Standard (LCFS).

With the fats and grease growth and imports Burk’s data shows another 483m gallons that could be  produced.

On the corn oil side they do not see anything changing dramatically in supply and demand, except for the exports dropping off.

“We feel that carbon intensity will increase the price of corn oil assuming the biodiesel and renewable diesel production picks up,” he said. “We have seen exports fall pretty dramatically over the past 5 years.”

In 2018, the distiller’s corn oil efficiency that comes out of a bushel was 0.752 lbs/bushel. Burk explained that as an ethanol plant brings in a bushel of corn and processes into ethanol they were only getting 0.752 lbs out of that bushel. There are some plants that can get as much as 1 lbs/bushel, a 25% increase.

As prices go higher, the industry is going to see the technology improve and see more yield of corn oil coming out of a bushel. With corn oil, FCStone sees an additional 121m gallons of additional feedstock.

“With all these different feedstocks, we feel there is another 1.7 to 1.8bn gallons of feedstock that can be available in the coming 10 years.”

Analysts expect that renewable diesel and co-processing is where all the growth is going to be.

Also called “green” diesel, renewable diesel is a biomass-derived transportation fuel suitable for use in diesel engines. It meets the ASTM D975 specification in the United States and EN 590 in Europe.

Renewable diesel has a much higher entry cost than biodiesel. It is a drop-in fuel and historically has received the $1/gal biodiesel tax credit and generates a D4 RIN.

The US currently has 397m gallons of capacity as reported by the National Biodiesel Board (NBB).

“I think we can add 1bn gallons of capacity in the coming three to four years just looking at the publicly announced plans,” Burk said.

The co-processing remains a question mark. Renewable diesel that is produced when an oil company adds small amounts vegetable oils or animal fats to the traditional petroleum refining process when producing diesel fuel is called co-processing.

The cost of entry for co-processing is very small because it utilizes existing petroleum refinery and just adds in some renewable feedstock to generate the RINS. It is also a drop-in fuel and historically it has not qualified for the $1 tax credit.

The biggest challenge for co-processing is feedstock as refiners would need a highly refined biomass feedstock that doesn’t have any metals.

“Nearly all refiners in here are working towards this and looking to see how they can co-process,” Burk said. “Almost every refiner has asked to get soybean oil samples so they can do some R&D and see what it is going to take to co-process it all through different plants.”

However, refiners are slow to pick up on new technologies, sources at the conference said.

“It would the RINs (Renewable Identification Number) rallying back to about $1/RIN and then you would probably see refiners get pretty aggressive and do some co-processing so they could generate their own RINS and take care of their own RVOs (Renewable Volume Obligation), versus buying the gallons to blend or buying the RINS to offset the RVOs,” Burk said.

There are growing pains associated with new technologies and trends.

While about 46% of US biodiesel comes from soybean oil, another 46% is derived from waste oils and fats, with about 14% from animal fats, 17% from UCO and 15% from distillers corn oil (DCO). The majority of the biofuels feedstocks are grown or produced in the Midwest, and about all the increased capacity being discussed is on the coasts.

“I think you might start to see a fight between the feedstocks,” Burk said. “I think going forward we are going to see some pretty dynamic shifts in prices and how these fats and grease feedstocks are priced versus vegetable oils, especially with some additional states coming up with programs similar to LCFS.”

What to Focus On

The numbers to really focus on are the total production capacity of biodiesel and renewable diesel, FCStone shows that growing from 2.167bn gallons in 2018 to 4.14bn gallons in 2028, nearly doubling in the coming 10 years.

“Keep in mind in 2010, I don’t think anybody would have said we were going to see soybean oil usage into biodiesel go from sub 1bn lbs all the way up to 8.2 – 8.4bn lbs, so to think we could be seeing close to 17-18bn lbs of feedstock between soybean oil and canola oil going into biodiesel and renewable diesel, I really don’t think that is unattainable,” Burk said.

The other important data to look at is the projected feedstock supply.

In the next few years, the feedstock and supply available is expected to be less than the capacity and demand.

“I do think that the feedstock will lag a little bit there,” Burk said. “We are going to have potentially a bigger pull on demand side than what we have in supply. So, I think in the coming five years you could see a price rally, like we did in 2007-2008, then that would slow capacity build out and allow supply to get better equilibrium.”

The last point to keep in mind is feedstock cost 10 years ago versus today.

If you look at SBO cost 10 years ago versus today and you add in 2-2.5% inflation, SBO prices are flat from 10 years ago even taking into consideration that there is 8bn lbs of additional demand going into biodiesel.

“When some of the economists out there say we are going to see feedstock prices go though the ceiling, I don’t agree with that,” Burk said. “I think we will see a modest increase, but I don’t think it will be as dramatic because we will have the supply right behind the capacity.”

The Oleochem Analytics team hopes that this deeper look at renewable diesel was insightful.  Don’t miss the next chapter of this discussion in the November 5th publication where we will look at Europe’s RED II transition.